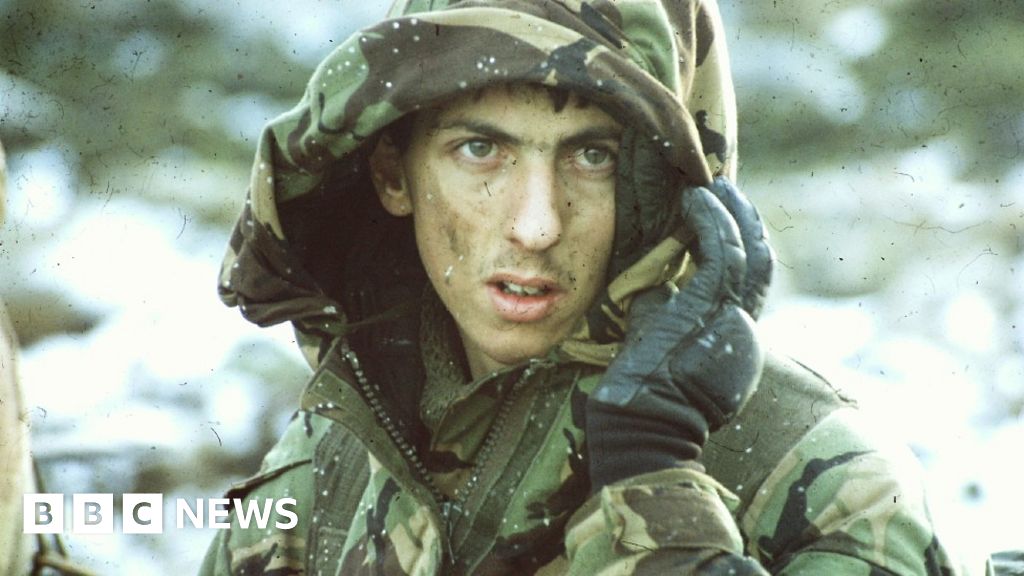 When Tim Rees bought himself a camera while first serving in the Welsh Guards in the 1980s, he could not have foreseen how it would change his life.
Falklands War veteran Tim, of St Twynnells, Pembrokeshire, describes his life up to that point as a regular young soldier “doing bits and pieces with the army”.
He was taking pictures at a winter sports’ day when he noticed the commanding officer moving towards him.
A young private at the time, he was keen to avoid the attentions of his superior and kept backing away as he took snaps but “eventually, I couldn’t go any further”.
But the commanding officer’s (CO) words took him by surprise.
“He said to me, ‘I see you’re taking pictures and that’s a lovely camera you’ve got there. I want you to get them printed and bring them to me’,” Tim said.
When the CO looked at Tim’s photographs, he sent him on a photography course at the brigade’s headquarters in Berlin.
“I became battalion photographer because of Colonel Guthrie… a wonderful man and it was him who first gave me belief in myself,” Tim said.
“After failing at everything, in education, in life, academically, suddenly I was getting top marks in this photography course in the army.
“Then he put me on to an intelligence photography course and suddenly, I don’t know, it was him giving me faith in me, that I just grew as a human being. I appreciate him hugely.”
It was in this role that Tim was dispatched to the Falklands when war with Argentina over sovereignty of the south Atlantic islands broke out in April 1982.
Now he has released images from the period which have never been seen by the public before.
He recalls having limited time within daylight hours to take photos.
“I did as much as I possibly could,” he said.
“When I was taking those images I was literally grabbing five minutes here or five minutes there.
“We had to do everything within that… window of daylight. We’re cleaning our weapons, cooking our food, we’re having cups of tea. We’re still doing guard duty and watching out.”
He describes the Welsh Guard as a “family regiment”.
“I knew everybody so I’d go around and everybody is relaxed and doing their own thing. So for me from a photographer’s perspective, there were a lot of guys posing and being foolish but you’re looking for those photographs when they’re relaxed.”
The photographs are a mix of the men at work and relaxing, some taken after the ceasefire when a 25 June “Christmas Day” was held in the snow.
But there is one picture – at first glance the empty landscape of the wild islands – that on closer inspection reveals a tragic tale.
Forty-eight men – 32 of them Welsh Guards, like Tim – lost their lives when Argentine plans bombed two logistics ships, the RFA Sir Galahad and the RFA Sir Tristram.
One of those on board the Sir Galahad was Tim’s friend, Mark.
“There’s one photograph where I’ve got the back of someone’s head and in the distance there’s a curl of smoke, and that is Galahad and Tristram burning.
“All we’d known is there’s been a call gone out – red, red, red – and then you see Skyhawks [attack planes] looping across the sky and suddenly everybody is shooting at these Skyhawks.
“So the sky is just full of tracer rounds aiming at these planes and then they go down and they bomb the Galahad and Tristram and then they come back for us,” he said.
When they saw the smoke in the distance, the troops realised ships had been hit.
“My first thought was, ‘god Mark, I hope you weren’t on there, mate’. He was.”
Tim’s voice breaks and tears fill his eyes as he remembers the loss of his best friend, the emotion still raw even after four decades.
“We knew that our guys were on that ship. That was a tough one.”
Unlike many of those who served, Tim was able to work through the experiences after the war. He joined the BBC and the head of drama asked to turn his war story into a drama, Mimosa Boys, screened as part of the Play for Today series.
“It was an incredible experience for me making a whole film but about a period of my life which was still then very fresh in my mind. It gave me a licence to explore my own creativity,” he said.
“It was hugely beneficial to me in that I’ve since written five novels and now this [new] film script as well.”
He knows the process has helped him deal with the trauma.
“Because of Mimosa Boys, I had to talk about it. Writing Insights, my memoir, I had to really relive those moments and remember them and try and put them in some kind of context, and that is cathartic,” he said.
“One of the problem I think with a lot of the guys who have PTSD is they don’t talk about it. Maybe they haven’t had the opportunity to talk about it, maybe they don’t know how to talk about it.”
He had a revelation years after he started writing about how the creative process might have eased the burden he carried.
In a conversation with his father about 10 years ago, Tim mentioned that he had never suffered from PTSD.
But his father told him that he had – when he had returned from the conflict to live at home for a while.
“Apparently, I was screaming at night and crying my eyes out,” Tim said.
“I don’t remember that.”